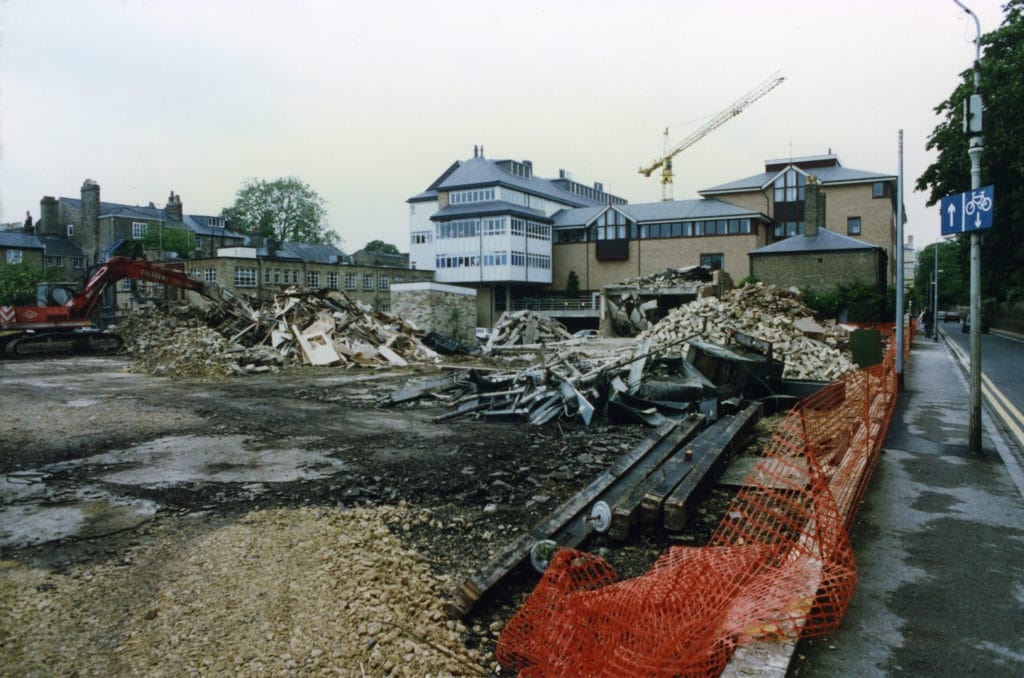 The founding of the Institute

A “host of coincidences” was responsible for the Gurdon Institute coming into being, says co-founder and cancer biologist Ron Laskey. He spoke to us on a visit to the Institute early in 2016 to meet a fellow alumnus who was delivering a seminar. This is his story:

“One day in 1985, I was attending a University of Cambridge meeting about developing the town-centre Old Addenbrooke’s site. I was then based in the University’s Zoology Department (as Charles Darwin Professor of Animal Embryology), and I’d heard that the Biochemistry Department was seeking embedded Units to join its proposals for a new building. On the same day, John Gurdon (John Humphrey Plummer Professor of Cell Biology) attended a Cancer Research Campaign (CRC) funding committee who were looking to found a new flagship research institution.  When John and I met for coffee the following day we realised that the two initiatives might be rolled into one. Together we presented the idea to CRC in November 1985, and it got a warm welcome. CRC could fund one floor of a new building, but in the meantime the Biochemistry Department had not won its funding so there wasn’t a new building plan that we could slot a new floor into.

“Some years down the line, I bumped into Chris Wylie, then at St George’s Hospital in London, who reported that the Wellcome Trust had offered to fund him and Janet Heasman in the area of developmental biology by providing a Program Grant. I suggested that it would be good to combine this offer with the existing offer from CRC. The Wellcome Trust (in the person of Michael Morgan) came to discuss this possibility with John and me but suggested that all four of us should join up with two other high-profile developmental biologists: Martin Evans and Brigid Hogan. Together our research areas would cover amphibian and mouse development, stem cells and cancer biology.

“Ahead of a formal meeting to present our plans to the Trust directors, we had a pre-meet in the pub and agreed we wanted to add in Michael Akam for expertise in Drosophila developmental genetics. That was the ‘Eureka!’ moment – when the Wellcome Trust agreed to the full line-up to make the Institute of Cancer and Developmental Biology. The Director of the Trust, Bridget Ogilvy, pressed us on how to ensure there would be turnover among the senior researchers.  Instead, I boldly suggested we needed a way to keep hold of successful people! Our model would be the MRC’s Laboratory of Molecular Biology, nominating a Chair rather than a Director, and giving all the group leaders an equal say in the running of the venture.

“By now it was 1988 and Chris Wylie and Janet Heasman joined the Department of Zoology in anticipation of the new building which got underway quickly once the university Vice Chancellor drew up plans with the two charities.  We suffered a couple of early setbacks, including an electrical fire (originating from a sequencing gel) in 1989 that gutted John’s and my old laboratories, and then an email from Brigid Hogan in the USA, to confess that she wasn’t able to tear herself away from her beloved Kentucky home and make the move to the UK.

“We quickly recruited Azim Surani to fill the gap, and soon afterwards Tony Kouzarides. I interviewed Tony between flights at Newark airport and it was clear straight away that we should have him. Charles ffrench-Constant was interviewed at breakfast in a hotel overlooking the Charles River in Boston. The next CRC recruit was Steve Jackson. When Steve replied to our job advert, I already had a file on him two inches thick because I’d had my eye on him for a long time.”

And so the foundations of today’s Gurdon Institute were laid…